Started in June 2011, ELDVPS has intervened with over 300 Zilla Parishad schools in Wada and Bhiwandi and taken 3785 children a step closer to achieving their dreams.

LSF realized that the children in Zilla Parishad schools do not have the required environment to learn English. The teachers being from the local areas are not trained to teach English and their own exposure to the language is limited. Along with this here is a major gap in the infrastructure and facilities making English learning difficult for the children.

LSF developed custom E-Teach modules to match the curriculum prescribed by Govt. of Maharashtra for vernacular schools. In the E-Teach model of learning, the class teacher uses a TV or projector or computer. The teacher is assisted by the EET content to explain objects/phrases as well as correct pronunciation. LSF facilitators support and equip the teachers to use the equipment and aid their English teaching skills with classroom activities.

English learning content in E-Teach module is developed keeping in mind the needs of students as well as teachers alike. Standard use of English, correct pronunciation, sentence formation and other nuances of the language are covered in the module. Team LSF’s primary focus is on teacher training to enable them to teach better. With the help of Zilla Parishad officials, LSF has been able to improve English language proficiency of teachers in over 300 schools, while improving English learning quality for over 3785 students over this journey of 105 months. 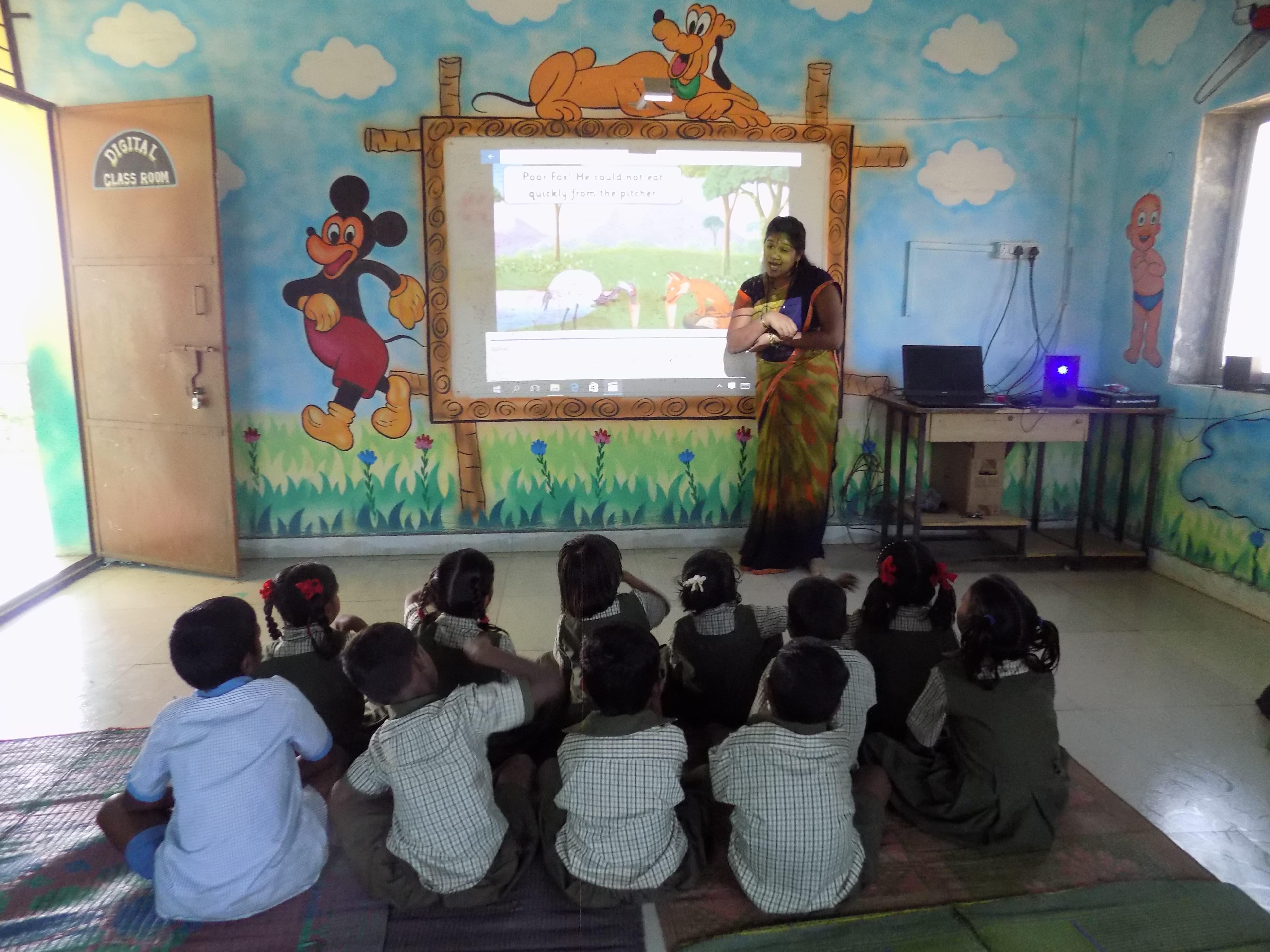 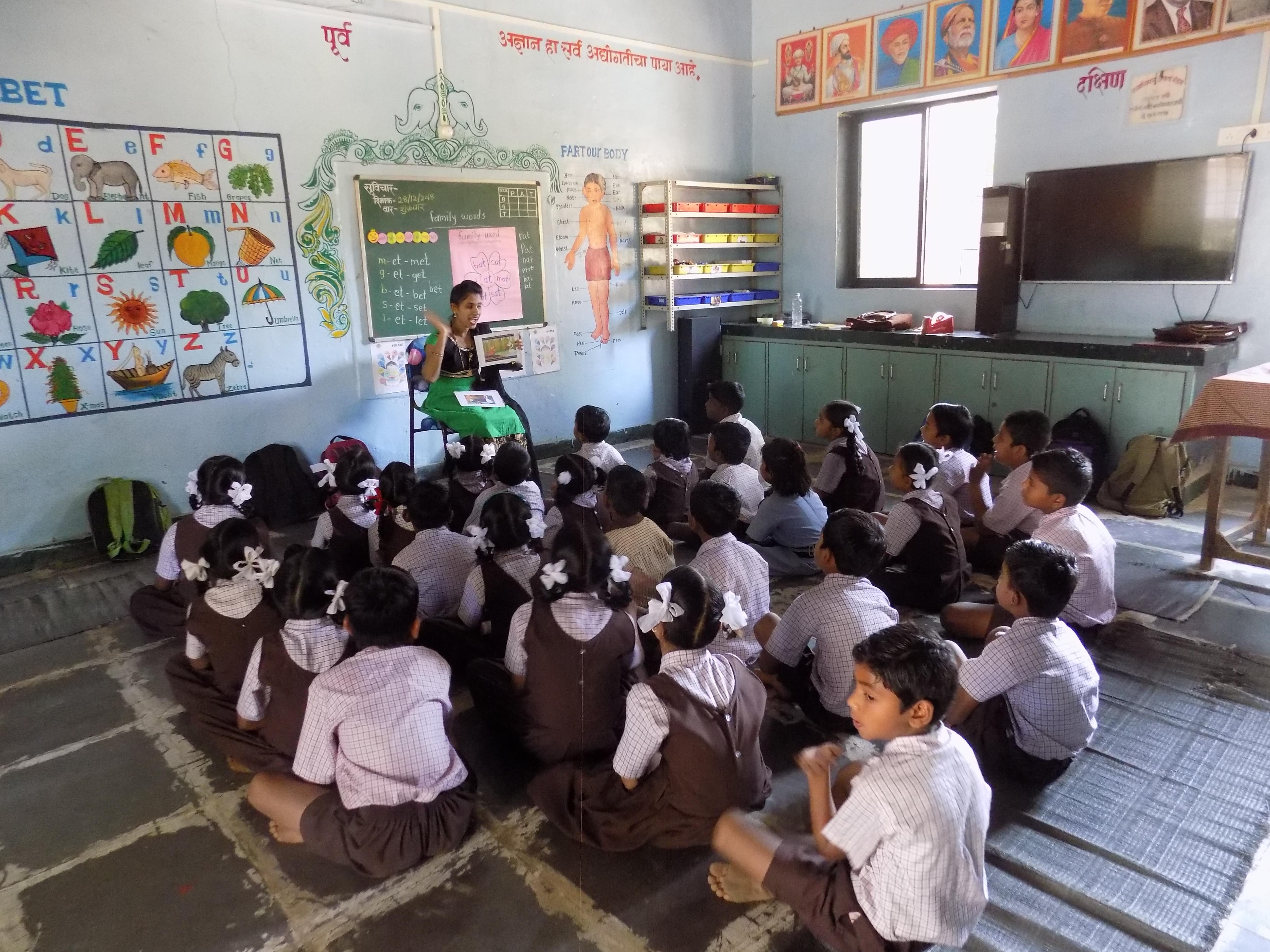 LSF’s focus is the vernacular Zilla Parishad primary schools facing challenges in teaching.LSF facilitators empower the teachers to develop better teaching abilities. Teacher training programs are designed to improve their English proficiency and teaching skills. LSF equips the schools with required teaching material and necessary infrastructure to create an environment that fosters the growth and development of rural children.

These 3785 students are now able to

While the teachers are able to use their modules efficiently, their personal command over the language has improved greatly.

The tribal population in Wada Taluka of Palghar district is farmers with marginal or no land holdings. They also migrate to work in brick factories, local farms and non-farming enterprises in the district. It is very common in Wada for the locals to migrate for work with the entire family. This socio economic backwardness has left their children between the age of 0-6 malnourished. Therefore, the ICDS system managed by Anganwadi workers prioritizes malnutrition over any other areas for these children. Even the equally important and critical areas of Early Childhood Education (ECE) are neglected.

Also as per ASER reports the Taluka education system indicates poor standard of school readiness amongst preschool students and poor school transition amongst primary grade students. After decades of planning finally during academic year 17-18 there are strong movements by the Central and State Governments to put a formal policy in place for ECE similar to the RTE enactment in 2009. In terms of standardization the draft policy which is likely to be rolled out within a year talks about qualification, curriculum and play routines, infrastructure design (including learning materials), assessment methods, parents’ engagement and the process of monitoring and reporting. Despite the good intentions there are significant gaps which need to be addressed before the rollout becomes feasible.

After identifying these gaps across the rural education setup, two non profits – Learning Space Foundation and Muktangan, initiated a pilot intervention in 2013 at Wada which started with 25 Anganwadis and 25 Zilla Parishad schools. This has now scaled to 271 Anganwadis in phase 2 spanning between 2017 and 2020. Through systematic tracking of the effectiveness of these alternative approaches within the pilot project, the goal is to share the learning in the form of a research document as well as develop the capacities of the partnering NPOs to scale in other geographies using the knowledge developed in the pilot. 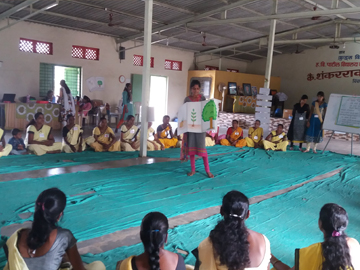 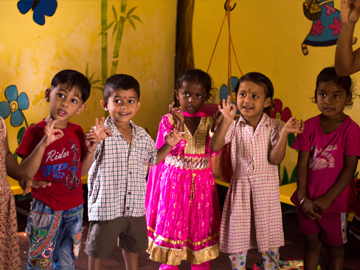 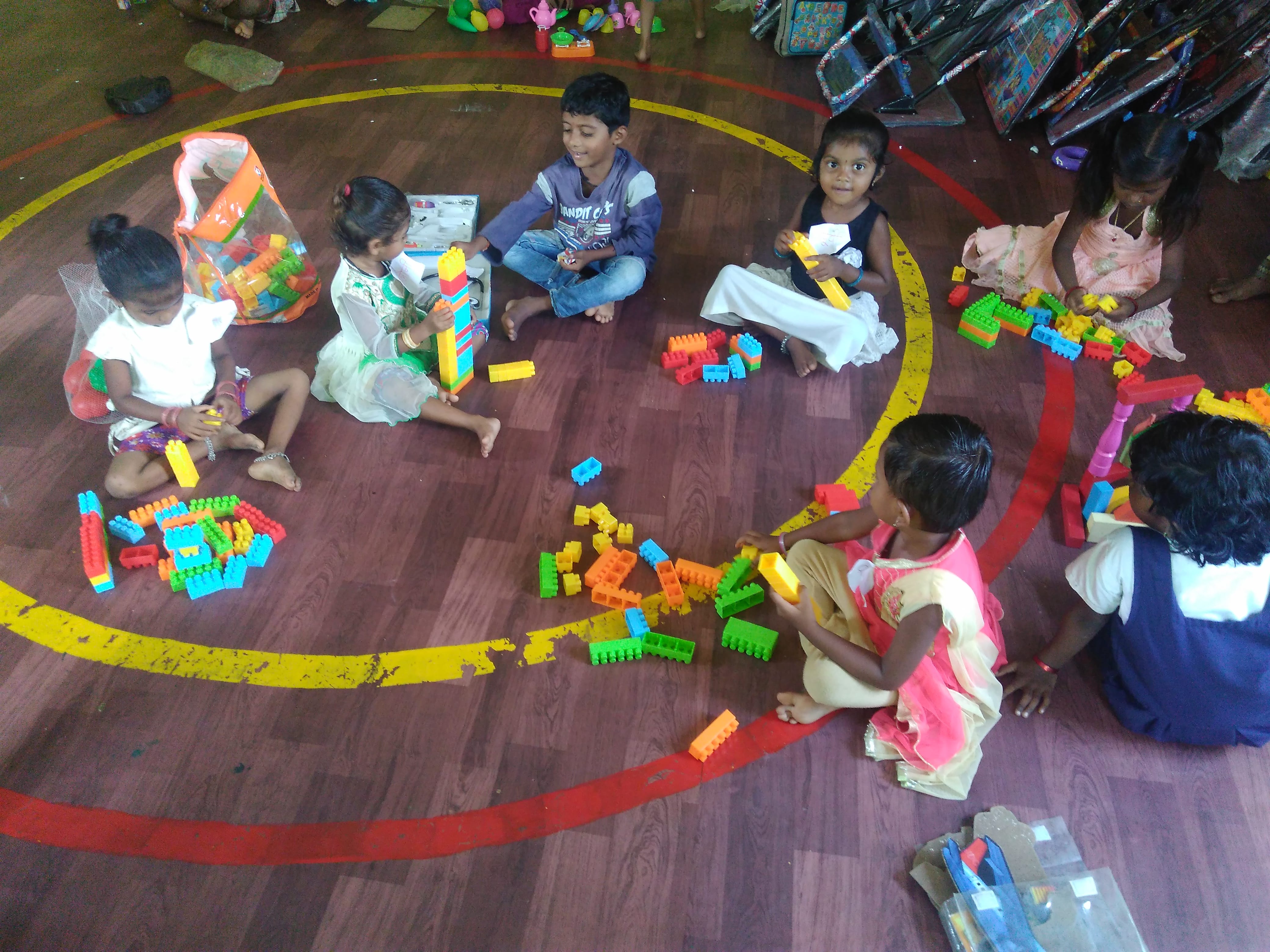 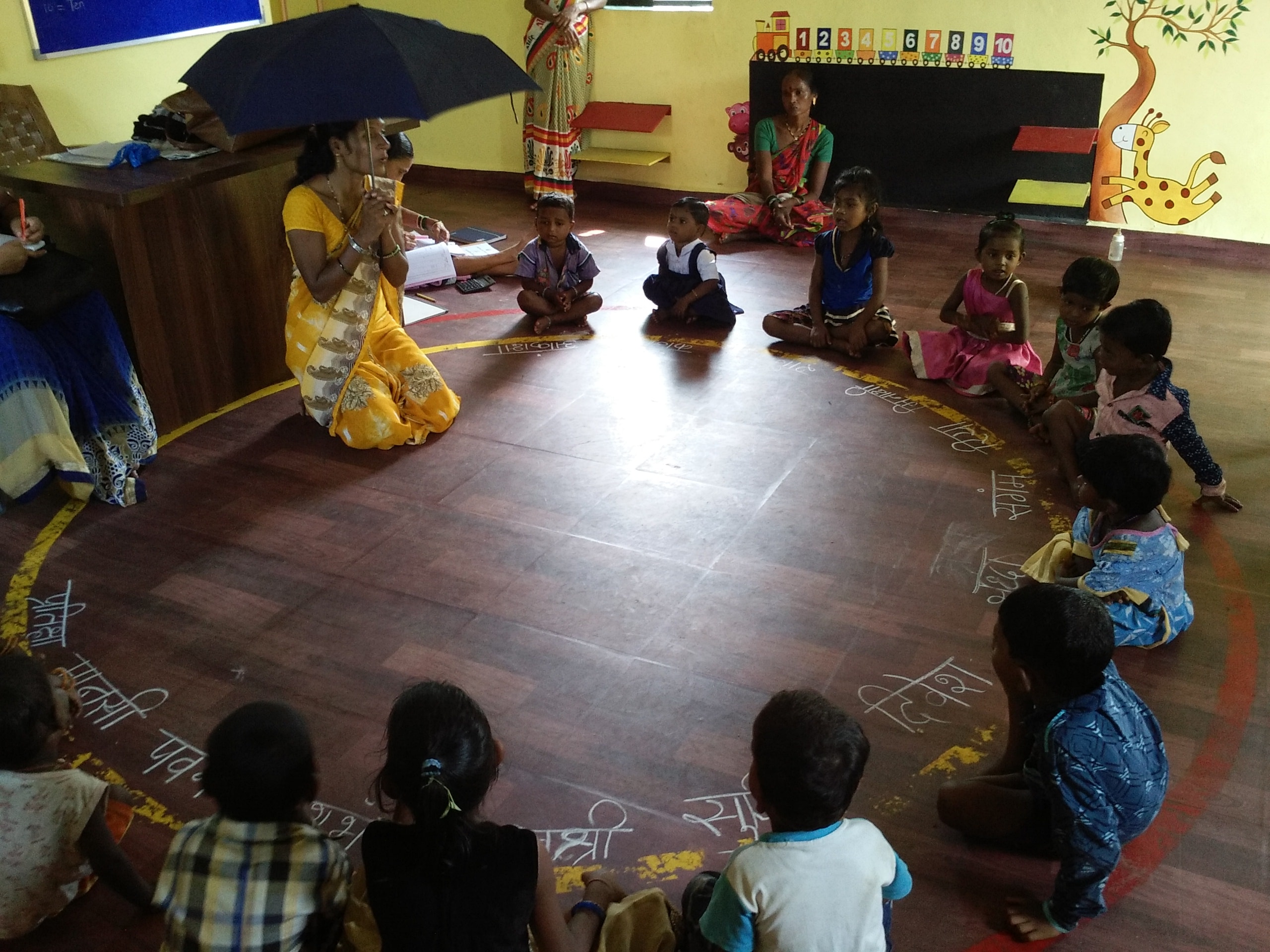 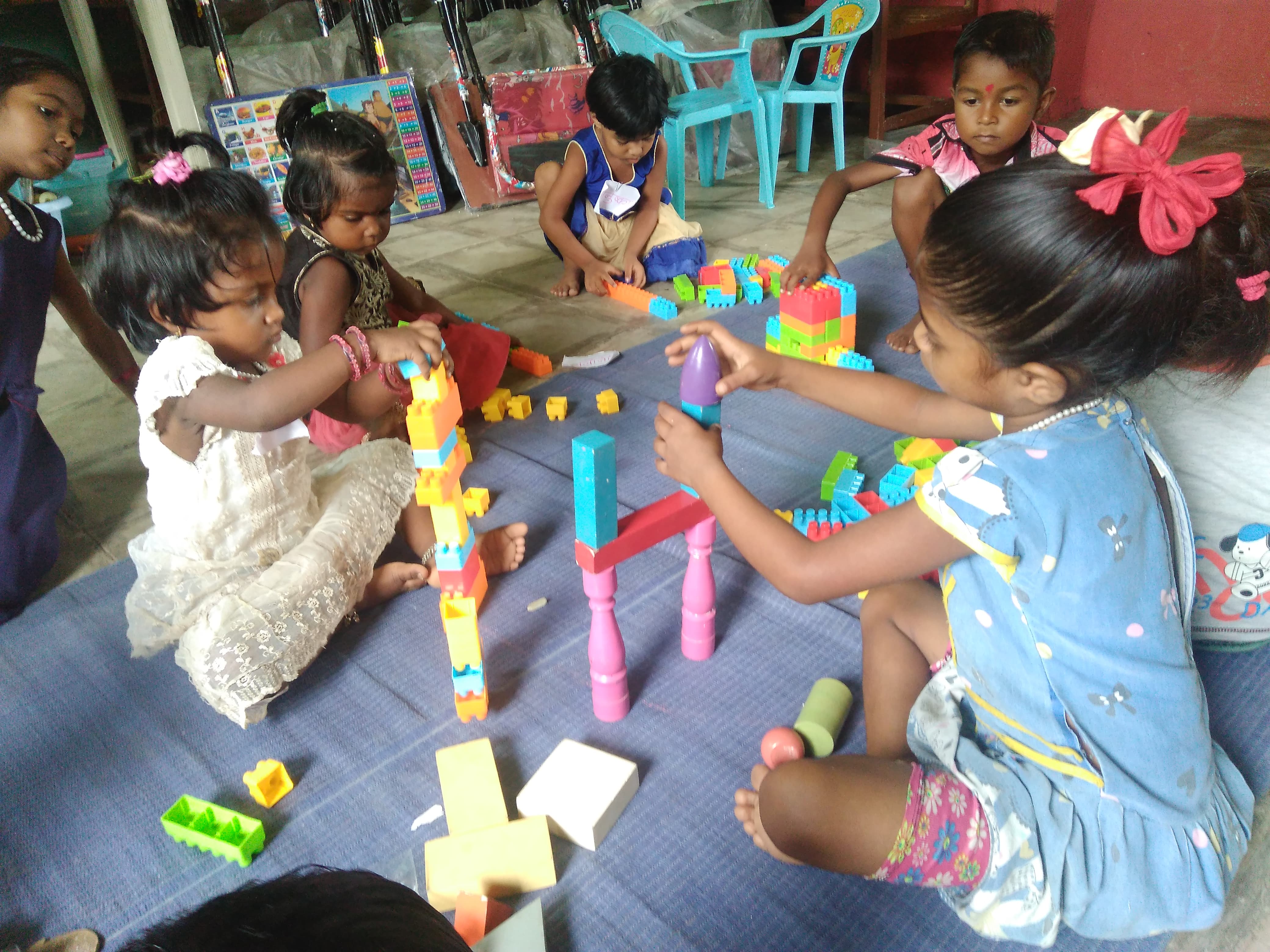 ELDP programme directly benefits pre-school children in the age group of 3-6 who have enrolled in Anganwadis in the ICDS block of Wada. Along with them, the Anganwadi workers and helpers (Karyakartis and Madatnis) also get the benefits of training and structured handholding by rural facilitators. They also get access to high-quality learning toolkits that add to the development of their teaching abilities. The ECE model aims to establish an impactful and sustainable model that can be carried forward by the trained Anganwadi staff even after the exit of capacity builders. And before all of this, the rural ECE facilitators are trained to deliver basic process training and implementation at field level.

271 Anganwadis, 271 Anganwadi Karyakarti (worker), 219 Anganwadi Madatnis (helper), 9 Anganwadi Mukhya Sevika (supervisor) and a total of 6643 children in the age group of 3-6 have been benefited by the ELDP programme.

After 5 years of intervention, the Anganwadi Karyakartis are able to install and independently implement the basic components of ECE and conduct everyday ECE activities which are resulting in the better learning experience of students. Special efforts have been made for developing trainers from the group of Anganwadi workers and supervisors who are able to conduct trainings. A top quality curriculum has been developed after pilot testing. Specialized toolkits contextualized for rural ECE have been developed which can be used to replicate the success of the development model created here.

Throughout the process there has been systematic documentation of pedagogy, processes for design and implementation strategies adopted, reports and case studies and other empirical evidence that could be used as a reference and replicated in development of other blocks by government and other nonprofits. 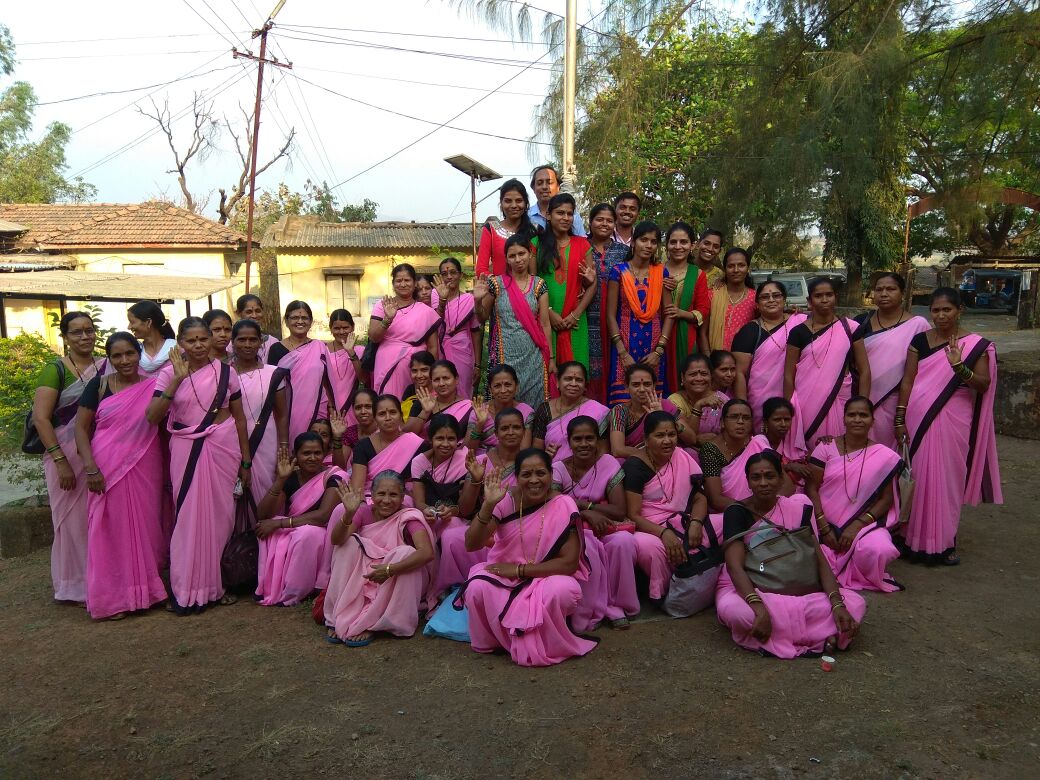 About Computer Literacy for Schools

For the past 9 years, computer literacy programme run by LSF has set up 15 eLearning centres in 15 Zilla Parishad schools in Palghar, Wada, Vasai, and Dahanu. The programme has enabled 3031 children to develop vital computer skills which provide them with future opportunities to pursue higher education in the field of Information Technology.

Children at an early age like to become familiar to computers and think of it as ‘fun’. With time technology becomes an integral part of their interest and draws them to attend school. After sometime children are able to learn basic computer skills as well as advanced IT applications and also access computer-based lessons taking their familiarity to a proficiency level.

The programme not only focuses on computer skills learning but also soft issues like eliminating the fear of using technology and developing presentation skills. The broader objective of the programme is to motivate tribal students to consider higher studies in IT courses and empower them to reach closer to their dreams by imparting a skill critical for today’s workforce. 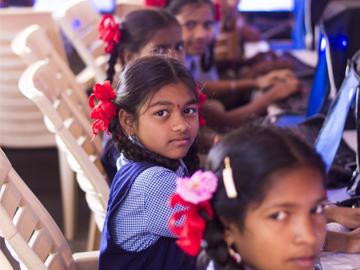 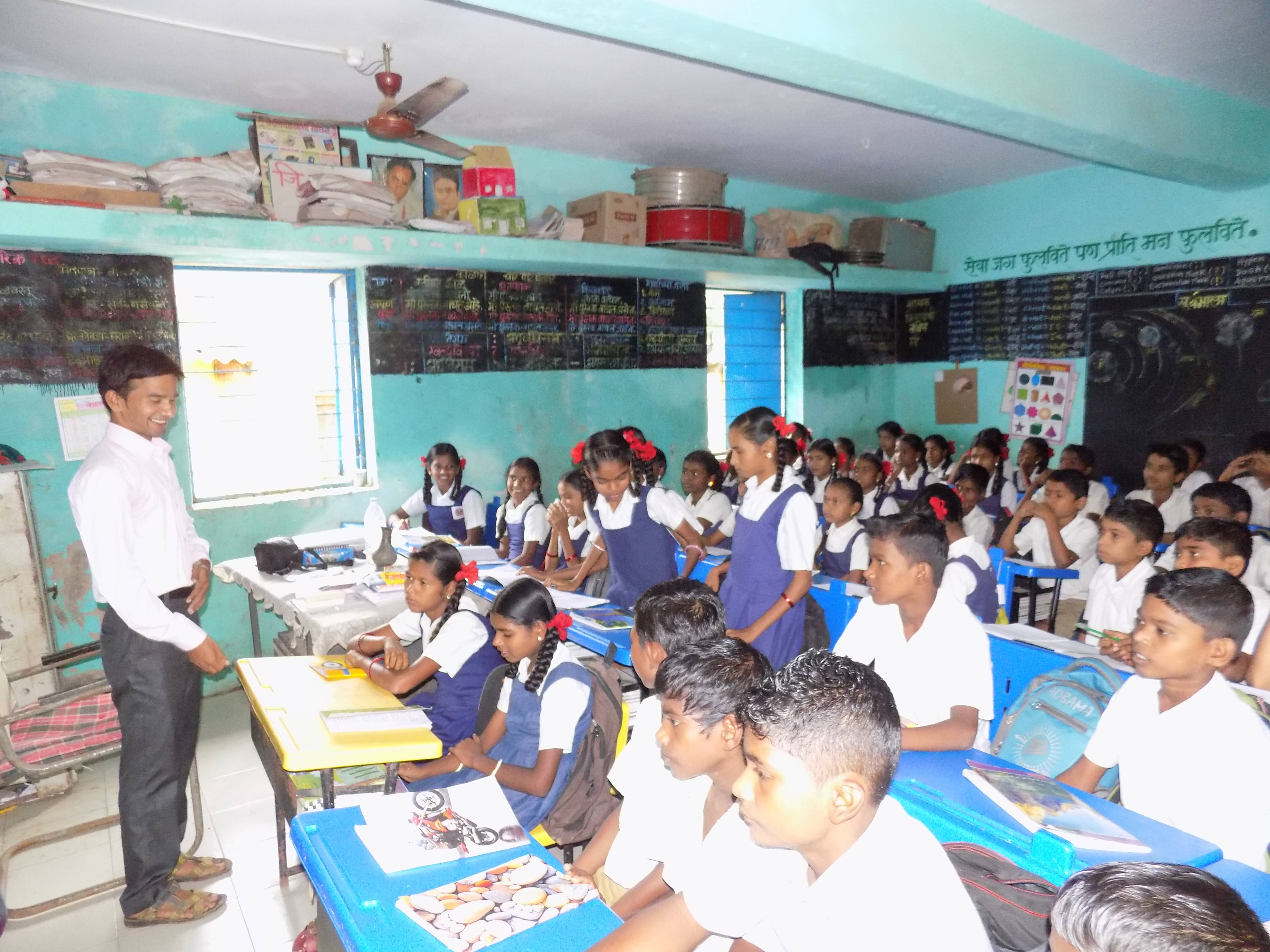 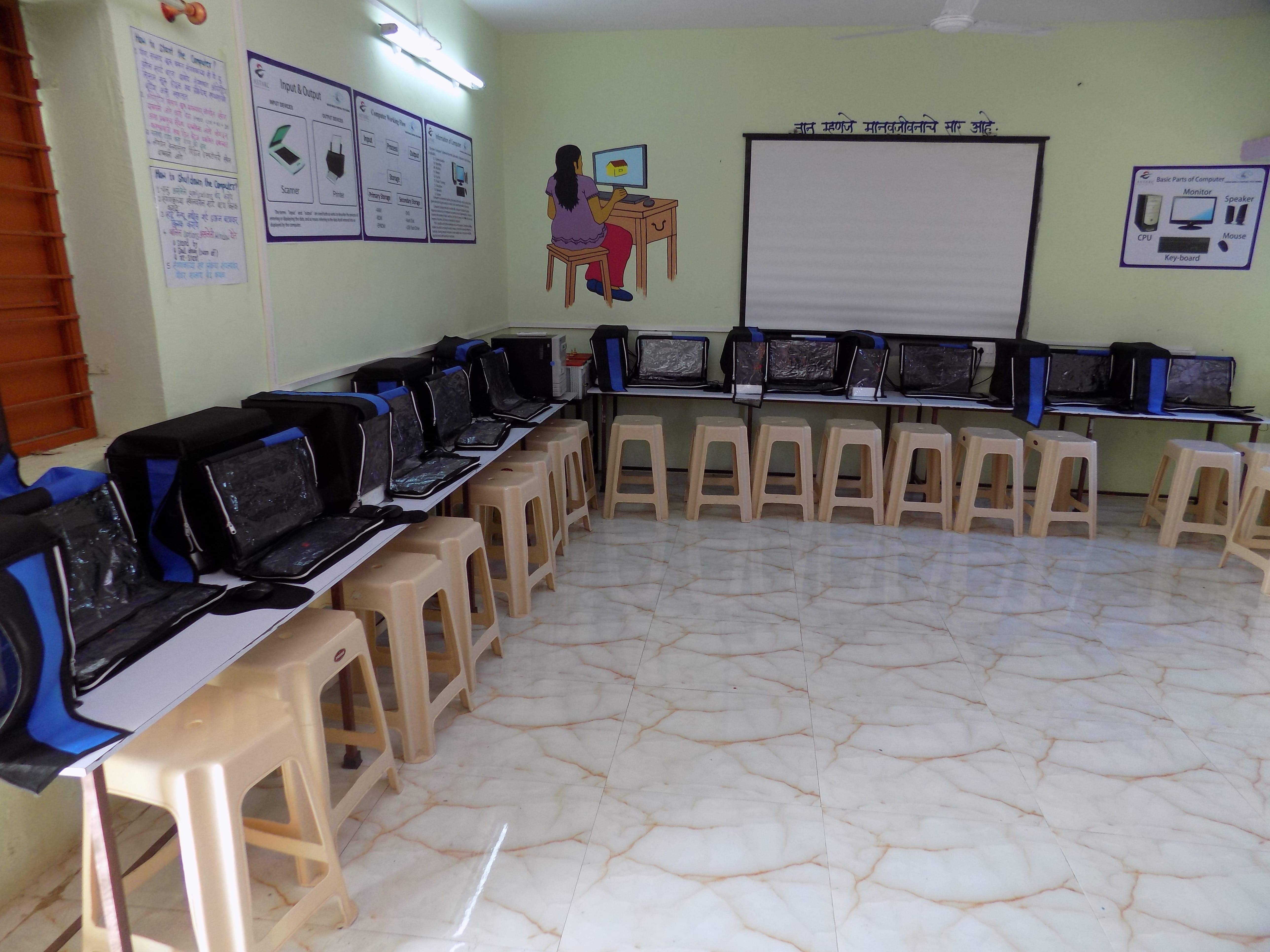 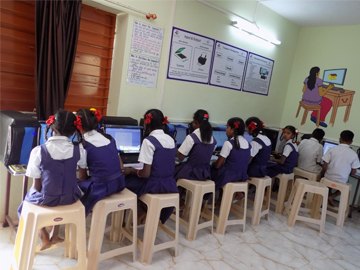 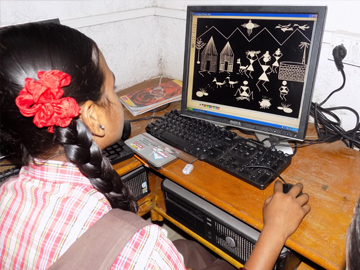 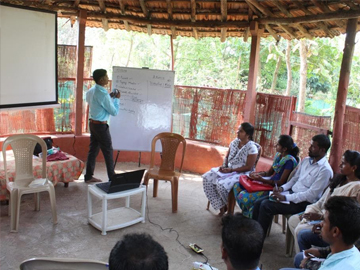 Children from grades 5 to 9 of Zilla Parishad schools are imparted computer skills to build a foundation at an early age. 15 centres across 15 schools have been set up which has a separate eLearning lab equipped with 10 computers and a wireless internet installed.

These children have never been exposed to computers before and the LSF team works initially for some time just to develop a familiarity with the technology. Once familiar there is no looking back for the students. With the sessions conducted by qualified teachers, the children start to learn basics and advance computer programmes as well as hardware with ease.

LSF also takes into account the availability of electricity in the region and sets up UPS that can be used in case of power failure.

The eLearning programme is absolutely gratifying when we see 3031 children In Zilla Parishad schools working at ease with computer programmes like MS Office, creating small presentations as well as working on the Internet. They are able to surf the internet while sending emails. One of the key contributions of the students is converting school’s data documented in physical files to soft copy databases through the skills they have acquired. 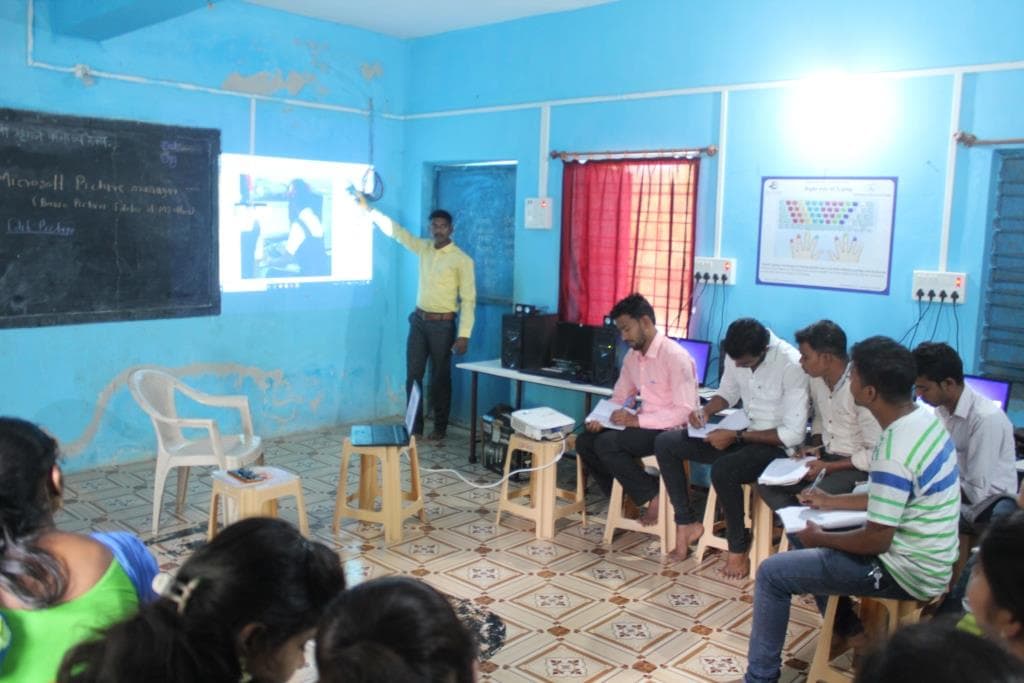 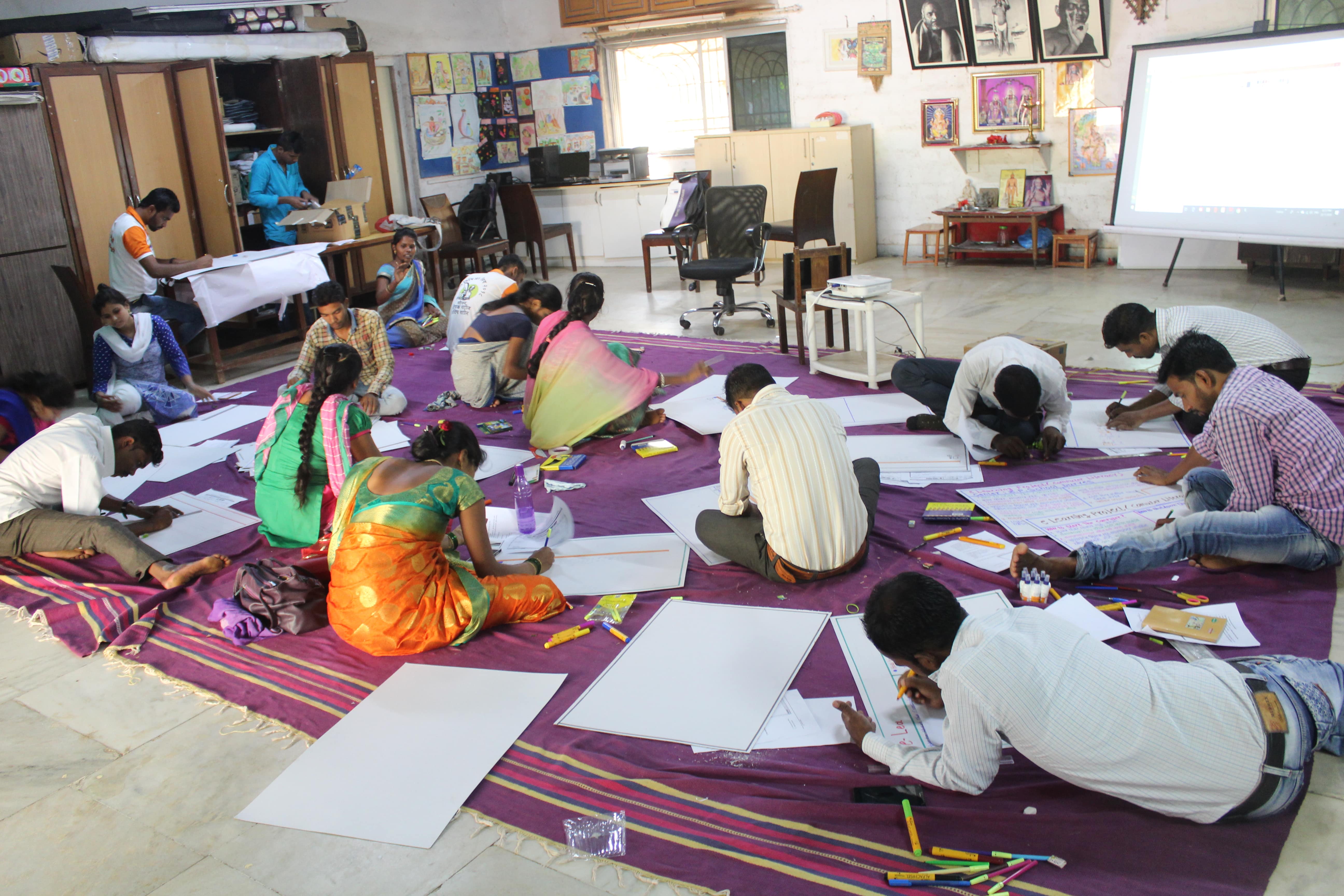 About E-Kit for Primary schools:

E-Kit Installation project is one of our latest partnership projects being promoted by Rotary Club of Downtown Sea-land. LSF is the implementation partner covering 155 schools in Wada block of Palghar for the installations. Rotary wanted to enhance the teaching and learning experience at Zilla Parishad schools and as s step towards digitizing education, 120 Smart LED TVs of 32” have been installed at these schools. The smart TVs have been updated with content based on the syllabus and the teachers are provided training to use the E-Kits effectively and monitor the activities to ensure the sustainability of the project.

E-Kit’s are installed in primary classes in Zilla Parishad schools. Hence children get accustomed to digital learning methods early in their life. Teachers of these schools get trained well to be able to use the kits efficiently and also focus on the entire learning process to make it effective. 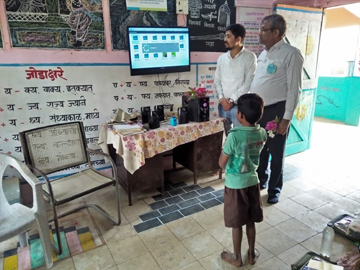 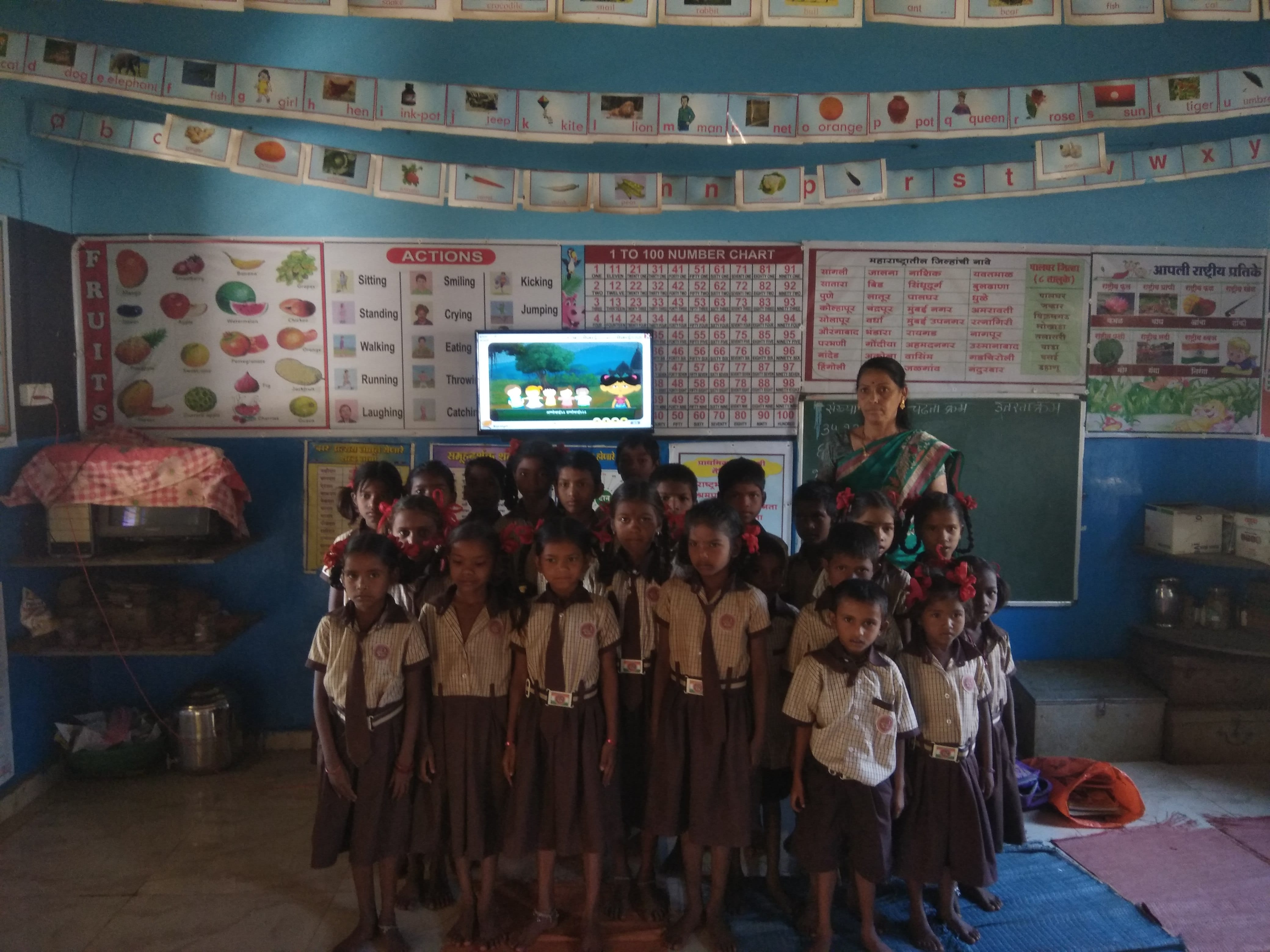 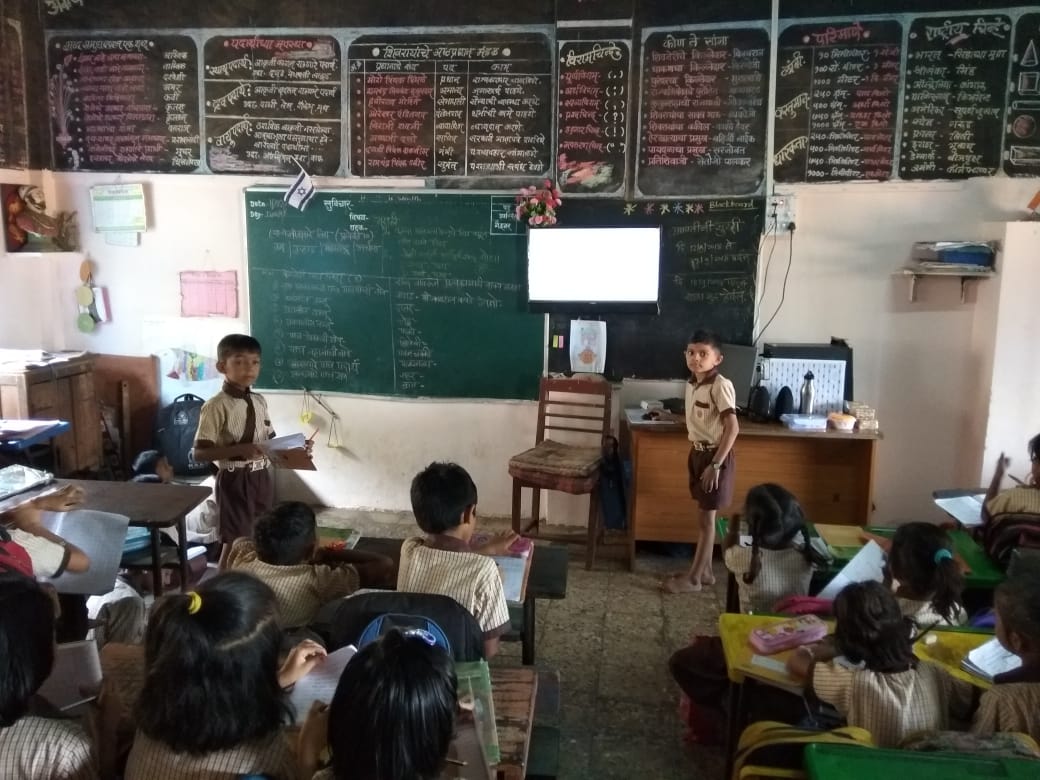 Sustained training and wide installations amongst 120 Zilla Parishad schools have enhanced the learning environment for 76901 children across the Wada block. As a result of the ongoing efforts

The Learning Space Foundation, abbreviated as LSF, is a Palghar based Non-Governmental Organization (NGO) working on Education and Livelihood issues since 2006. Through the years, LSF has evolved to put into practice a holistic approach of providing education in different ways. Our focus is on reaching out to rural and adivasi populations in the remote villages of Maharashtra who lack avenues to receive basic education and development. We not only sensitize thelocal communities about various issues concerning holistic development of children and youth but also engage them in providing an enriching environment for the children.